The 2019 Freedom Old Home Week theme is “Freedom Lights the Way”. Back in 1919, one hundred years ago, electricity replaced gaslight in the village.

Some of Scott’s contributions include:

Some of Anne’s contributions include:

Although Scott and Anne will be riding in their convertible, the old family Woody will once again be in the parade. The Woody has been in the parade for over 60 years! 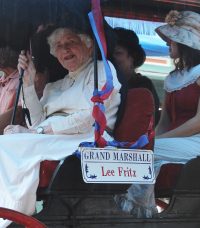 The 2018 theme was “Preserving Freedom’s Legacy – Historical Society’s 50th Year”.  A legacy is a situation that exists as a result of things that happened at an earlier time.  Our Grand Marshall, Ms. Lee Fritz, has many legacies from having been a consistent volunteer in many capacities in Freedom for over 40 years.

When Lee was asked if she would consider being the 2018 Grand Marshall, her response, in her sweet southern North Carolina accent was, “Well, I think I can do that….If I can remember, then I want to share. That will be my legacy.”

The prime criteria for the Freedom Old Home Week Grand Marshall is overall volunteerism throughout Freedom. Peg has been a consistent volunteer in many capacities for over 30 years. Her participation includes but is not limited to the Freedom Club of NH, Freedom Village Store, Freedom Town Forest, Freedom Public Library, Freedom Historical Society, Heritage Commission, Freedom Elementary School, First Christian Church and our Old Home Week Committee. Most of all, images of Freedom will be available for all to cherish for many years because of Peg’s art work. Eighteen of these images have been on Freedom Old Home Week shirts and tiles. As people enter Freedom, a Freedom Village image painted by Peg welcomes them to our town. We thank Peg for being part of Freedom, for all she has done and for contributing to its everlasting memories through her artistic visions. 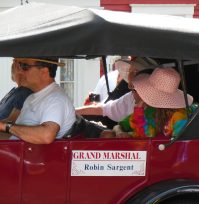